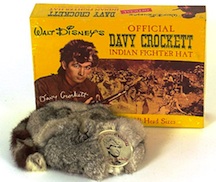 One of the well-remembered TV heroes for children of the 1950s was Davy Crockett. In December 1954, Walt Disney’s Wonderful World of Color aired “Davy Crockett, Indian Fighter,” which starred Fess Parker. By the time the three-part series ended in February 1955, Crockett-mania seized the country. Davy Crockett merchandising had the Disney folks running on 14-hour days, 7 days a week.

The hottest item was a replica of Crockett’s iconic coonskin cap. The original toy cap was made of raccoon pelts, but demand quickly exceeded supply and a faux fur skullcap with a tail came into being. The Polly Crockett caps, which were for girls, had white fur and tails. Also available were a Crockett peace pipe, rifle, and powder horn. There were bath towels, a guitar, and lots more.

Why? Some believe it was just a mixture of baby-boomers + TV + advertising. Fess Parker believed there was a “hero-hunger.” Davy Crockett was a larger-than-life frontiersman, a Congressman, and a soldier. He fought against President Jackson’s Indian Removal Act, which took away homelands of Indians in the South and sent the people West of the Mississippi River. Crockett also fought in the Texas Revolution and died at the battle of the Alamo.

Parker was born in Fort Worth, Texas, in 1924. He was 6’ 6” and served in the U.S. Navy and Marine Corps. Before Davy Crockett, he had appeared in some films  (e.g., Them!, Harvey) and TV programs (Dragnet, Annie Oakley, My Little Margie). Parker said, “I am an actor and a son of Texas. There have been several turning points in my life, but the most important one came the day I stepped in before the cameras as Davy Crockett.” He went on to the TV series Mr. Smith Goes to Washington and Daniel Boone. Parker died in 2010 in Santa Ynex, California.