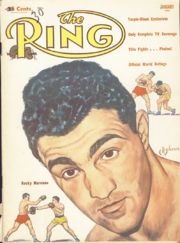 Boxing was a popular sport during the 1950s. TV boosted that popularity and made boxers into national celebrities. There were fights broadcast every night during our doo-wop era – except for Sunday. And Rocky Marciano was one of the biggest celebrities in the sport.

Here’s a little bit of trivia about him: