A Sunday Kind of Love by The Harptones

A Sunday Kind of Love by The Harptones 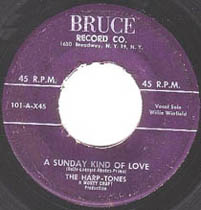 The Harptones (also spelled Harp-Tones), featuring Willie Winfield on the tenor lead, were one of the most revered and influential doo wop vocal groups, even though they didn’t have nationally charting hits in this first era of rock and roll.

The song “A Sunday King of Love” is more than one of the golden oldies favorites, as it’s a jazz and pop standard It was written by Barbara Belle, Anita Leonard, Stan Rhodes, and Louis Prima, and was first published in 1946. The first recording was by Claude Thornhill and his Orchestra, sung by Fran Warren, in 1946. Louis Prima, Frankie Laine, Jo Stafford, and Ella Fitzgerald recorded it in 1947. And then there’s the great arrangement by The Harptones, with their special harmonies, which was recorded in 1953.

The Harptones formed in Manhattan in 1953. Notable are the lead singer Willie Winfield and their pianist/arranger/singer Raoul J. Cita who knew how to work their strengths. For “A Sunday Kind of Love,” group members were Winfield, Cita, Nicky Clark, William Dempsey, Bill Brown, and Bill “Dicey” Galloway. Other classic songs from The Harptones are “Life is But a Dream” (1955) and “My Memories of You” (1956). Group personnel has changed over the years, but The Harptones continued to tour and perform for many decades.

Here are the lyrics to “A Sunday Kind of Love” by The Harptones:

Please click here for the Daily Doo Wop YouTube channel, to which you can subscribe. Thank you for stopping by The Daily Doo Wop. Hope you enjoyed “A Sunday Kind of Love” by The Harptones.