Tossin’ and Turnin’ by Bobby Lewis

The Moondog Coronation Ball at the Cleveland Arena is considered to be the first big rock and roll concert.  It was chaos, a disaster, but it helped to launch a new era in music.

Alan Freed, the disk jockey on WJW-Radio in Cleveland known as “Moondog,” organized the event along with Lew Platt, a concert promoter, and Leo Mintz, who owned the Record Rendezvous store. Freed promoted the concert on the air, and tickets sold quickly. Unfortunately, they sold about 20,000-25,000 tickets, and the Arena could hold only about 10,000 people. How did this happen? Well, there was a little counterfeiting going on, a lack of coordination and overbooking among ticket sellers, and a printing error on some of the tickets. 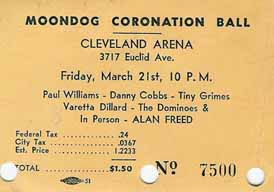 The concert was to feature Paul Williams and His Hucklebuckers, Tiny Grimes and the Rocking Highlanders, The Dominoes, Danny Cobb, and many others. However, ONLY Paul Williams got to perform. The police and fire authorities stopped the show due to worries about crowding and a potential riot.

The next day on the radio, Freed said: “If anyone…had told us that some 20,000 or 25,000 people would try to get into a dance—I suppose you would have been just like me. You would have laughed and said they were crazy.”

Please click here to listen to Paul Williams and his Hucklebuckers with “Huckle Boogie”:

For an article about Alan Freed the payola scandal: “Alan Freed Fire over Payola.”

Our Rec Room has a daily featured doo wop, rock and roll, R&B, or rockabilly song that was a hit during the first era of rock and roll (that is, from about 1952 until the British invasion in 1964). After a song is featured, it then goes into the jukebox. You are welcome to listen to any of the 40 selections there. Thank you for stopping by The Daily Doo-Wop. Hope you enjoyed “Alan Freed and The Moondog Coronation Ball.”