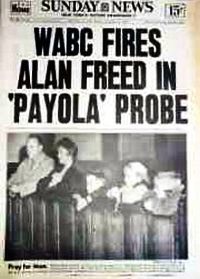 On November 20, 1959, WABC fired Alan Freed over the payola scandal, which effectively ended Freed’s career as a DJ and force in the record business. Moondog, as Freed called himself, was a Cleveland-based DJ who promoted black R&B to mixed race audiences and was an enthusiastic supporter of rock and roll. Please click here to read about the 1952 Moondog Coronation Ball.

The term payola, which is a contraction for pay and Victrola (the record player), meant the practice of paying someone to play a song on the radio to promote it. Payola did not become illegal until 1960 but commercial bribery was. That is not to say that payola wasn’t around during the big band era of the 1930s and 40s. The 1950s scandal came on the heels of the Congressional hearing about the TV program Twenty-One, a quiz show, where it became apparent that answers were rigged. An outcry came from some quarters to clean up radio. What was the real cause of the scandal? Some believe it was resistance to rock n’ roll and its so-called negative effect on teenagers. Others believe it was a matter of power and money: Small labels paid bribes to get airplay, and the big labels didn’t like it.

Freed was not the only one caught up in the scandal. Dick Clark admitted to wrongdoing and a conflict of interests, but it didn’t affect his career. Les Paul and Bobby Darin defended themselves against charges that they had paid to perform on Freed’s TV show. Freed was no angel (not to mention that matter of “co-authoring” “Maybelline”…), but he became the face of payola and was blacklisted from broadcasting. He died in 1965 of uremia and cirrhosis (from alcoholism) at the age of 43.