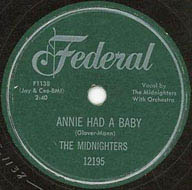 Hank Ballard was one of the first rock n’ roll artists to emerge in the early 1950s. His group Hank Ballard & the Midnighters helped to pioneer the rhythm and blues genre. Their big hit “Work With Me, Annie” had racy lyrics, which caused a  Los Angeles disc jockey to joke that there would be a follow-up record called “Annie Had A Baby.” Their label, King Records, received orders for the non-existent record. The song, written by Henry Glover and Lois Mann, was recorded and released to fill those  orders, and it went all the way to #1 on the R&B Chart in 1954. There was also another answer song “Annie’s Aunt Fannie.”

Hank Ballard was born John Henry Kendricks in Detroit, Michigan, on November 18, 1927. He began singing in church, and one of his early inspirations musically was Gene Autry, the “Singing Cowboy.” Ballard joined a group called The Royals in 1953, who changed their name to The Midnighters so they would not be confused with another group called The 5 Royals. Along with Ballard were Henry Booth, Charles Sutton, Sonny Woods, and Alonzo Tucker. Hank Ballard is one of the pioneers of R&B and rock and roll. He is also the composer, author, and originator of “The Twist” — both the dance phenomenon and the record. There was that cover by Chubby Checker, but it’s a long story… Besides “The Twist,” Hank Ballard and The Midnighters had hits with  “Finger Poppin’ Time” (released in 1960 and went to #7 on the Billboard Hot 100 and #2 on the R&B Chart), “Let’s Go, Let’s Go, Let’s Go” (also released in 1960 and went to #6 on the Billboard Hot 100 and #1 on the R&B Chart),  and many more. The group broke up in 1961 and Ballard continued for the next 20 years, sometimes as a solo act and sometimes with different versions of The Midnighters. He was inducted in the Rock and Roll Hall of Fame in 1990. He died in 2003.

Here are the lyrics to “Annie Had a Baby” by Hank Ballard and The Midnighters:

Please click here for the Daily Doo Wop YouTube channel, to which you can subscribe. Thank you for stopping by The Daily Doo Wop. Hope you enjoyed “Annie Had a Baby” by Hank Ballard and The Midnighters