Before Karaoke was Sing Along with Mitch

Some October History in the Doo Wop Era

The Smurfs are Born

Before Karaoke was Sing Along with Mitch 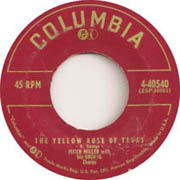 Imagine a room full of people singing to their television set. That was as interactive as it got. Mitch Miller’s Sing Along with Mitch, which aired on NBC from 1961 – 1964 (with occasional specials until 1966), was a community sing-along show that invited those at home to participate. Mitch played and conducted a large male chorus, who sang popular tunes. The viewers could see the lyrics on the screen and follow the beat through the “bouncing ball” or dot. Ballantine beer sponsored the show, and sometimes the dot was Ballantine’s logo of three circles connected as a triangle. He had a recognizable goatee and was “all smiles,” as he said. The up-and-down conducting style was something Miller developed from seeing a motion teacher at a school used to help the children with the rhythm. Featured regulars included singer Leslie Uggams, pianist Dick Hyman, the Quinto Sisters, and Bob McGrath. McGrath sang in the chorus and solos. (He went on later to become one of the hosts of Sesame Street.)

Miller, born Mitchell William Miller on July 4, 1911, in Rochester, New York, was an accomplished musician, oboe and English horn player, singer, conductor, and record producer. He studied at the Eastman School of Music in Rochester. Miller was a major influence in the recording industry, working at Mercury Records and many years at Columbia Records. had success with artists, including Rosemary Clooney, Frank Sinatra, Percy Faith, Ray Conniff, Johnny Mathis, Tony Bennette, Guy Mitchell, Patti Page, Frankie Laine, Doris Day, Dinah Shore, Jo Stafford, and Aretha Franklin.. He did not care for rock and roll. In fact, he passed on Elvis Presley, Buddy Holly, and The Beatles. However, he made innovations in recording that were used by many rock and roll bands. For example, he would work on the sound of songs in the studio, which would then become the sound when performed live, rather than the other way around. Miller was on recording sessions and had many charting singles and albums. Miller died at the age of 99 in 2010.

Here’s the sing along with Mitch group and the the Mitch Miller Orchestra with “The Yellow Rose of Texas.”

(A sign of success is satire. Steve Allen and MAD Magazine parodied poor Mitch. Even The Flintstones had “Hum Along with Herman” — for people who don’t know the words.)