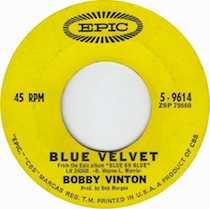 Here are the lyrics to “Blue Velvet” by Bobby Vinton:

Ours a love I held tightly
Feeling the rapture grow
Like a flame burning brightly
But when she left, gone was the glow of

Blue velvet
But in my heart there’ll always be
Precious and warm, a memory
Through the years
And I still can see blue velvet
Through my tears

She wore blue velvet
But in my heart there’ll always be
Precious and warm, a memory
Through the years
And I still can see blue velvet
Through my tears

“Blue Velvet” has a long history. It was written by Bernie Wayne and Lee Morris in 1950 . There have been numerous covers, including a recording by The Clovers that was released in 1954. Other versions include those by Brenda Lee, The Lettermen, Sammy Davis, Jr., The Moonglows, The Countdown Singers, Lana Del Rey, and Barry Manilow, among many others. David Lynch’s 1986 film Blue Velvet was inspired by the song and features it prominently (although creepily). No spoilers here, if you haven’t seen it.

Vinton was born Stanley Robert Vinton, Jr., in Canonsburg, PA, in 1935, and his father was a bandleader. (Perry Como came from the same town.)  Bobby was in the U.S. Army and has had a successful musical career that spans many decades. Besides singing, he play plays the clarinet, oboe, sax, piano, drums, and trumpet. Some of his hits include “Roses are Red (My Love),” “Blue on Blue,” “Blue Velvet,” “There! I’ve Said it Again,” “Mr. Lonely,” and “My Melody of Love.”

If you are interested in more of Bobby Vinton’s music, please consider this: Greatest Hits

The Rec Room has daily featured doo wop, rock and roll, R&B, or rockabilly songs that were hits during the first era of rock and roll (that is, from about 1952 until the British invasion in 1964). After a song is featured, it then goes into the jukebox. You are welcome to listen to any of the 40+ selections there. Please click here for our Youtube channel to which you can subscribe; it features music videos for doo wop music and more. Thank you for stopping by The Daily Doo-Wop. Hope you enjoyed “Blue Velvet” by Bobby Vinton.