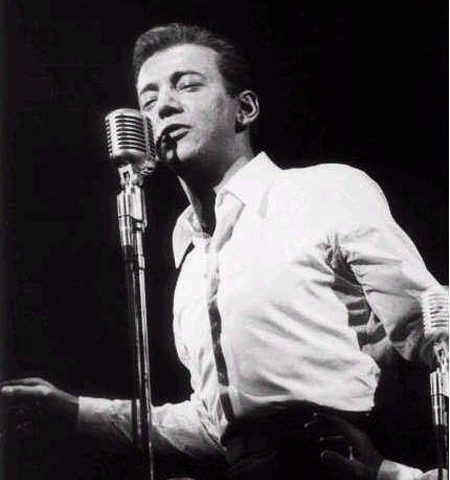 The song “Mack the Knife” as sung by Bobby Darin is a great golden oldie.. Kurt Weil  wrote the music and Bertolt Brecht penned the lyrics to “Mack the Knife” for their musical drama of murder The Threepenny Opera. Bobby Darin’s version of the song was a hit in 1959, going to #1 on the Billboard Hot 100, Cashbox, and U.K. singles Charts. It went #6 on the R&B Chart. Arranger Richard Weis took the concept of building a song to new heights by starting the record with the sparse sounds of a few horns, bass, and drums . Weiss then used a series of modulations and big band counter-melodies to build the record. Each verse adds a new section of the band, and by the end they are roaring. Darin’s voice powerfully commands all of that ruckus.

Darin was born Walden Robert Cassotto in The Bronx, New York, in 1936. He began as a songwriter and wrote songs for artists such as Connie Francis. “Splish Splash” was own first million-selling record. He had other hits with “Dream Lover,” “Mack the Knife,” and “Beyond the Sea.” He was a singer and played several instruments, including the guitar, piano, and drums. His music crossed a number of genres — rock and roll, jazz, blues, pop, swing. Darin appeared in several films. He was in Come September and If a Man Answers with Sandra Dee, whom he married in 1960. In the 1960s, he was politically active and worked on Robert Kennedy’s campaign for president. He died in 1973 at the age of 37. He had health issues throughout his life, as the rheumatic fever he had as a child weakened his heart.

Here are the lyrics to “Mack the Knife” by Bobby Darin:

“Oh, the shark, babe, has such teeth, dear
And it shows them pearly white
Just a jackknife has old MacHeath, babe?
And he keeps it out of sight

You know when that shark bites with his teeth, babe
Scarlet billows start to spread
Fancy gloves, though wears old MacHeath, babe
So there’s never, never a trace of red

On a sidewalk, blue Sunday mornin’
Lies a body just oozin’ life
Someone’s sneakin’ ’round a corner
Could that someone be Old Mack the Knife?

There’s a tugboat down by the river, don’t you know?
Where a cement bag, just a’drooppin’ on down
Oh, that cement is just, it’s there for the weight, dear
Five’ll get you ten Old Macky’s back in town

D’ja hear ’bout Louie Miller? He disappeared, babe
After drawin’ out all his hard earned cash
And now MacHeath spends just like a sailor
Could it be our boy’s done somethin’ rash?

I said, Jenny Diver, whoa, Sukey Tawdry
Look out Miss Lotte Lenya and Old Lucy Brown
Yes, that line forms way on the right, babe
Now, that Macky’s back in town
Look out, Old Macky is back”

If you are interested in reading and listening to other songs by Bobby Darin, please click here for “Splish Splash,” “Beyond the Sea,” and “Dream Lover.”

Please click here for the Daily Doo Wop YouTube channel, to which you can subscribe. Thank you for stopping by The Daily Doo Wop. Hope you enjoyed “Mack the Knife” by Bobby Darin.