All Shook Up by Elvis Presley 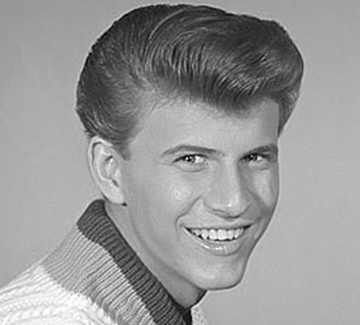 Pop Music with a Latin Beat

There were all kinds of dance rhythms in this first era of rock and roll — including Latin ones.  The cha-cha, with its distinctive beat, is a dance of Cuban origin, which became popular in the 1950s and 60s. Rydell’s “The Cha-Cha-Cha” went to #10 on the Billboard Hot 100 in 1962.

Bobby Rydell (Robert Louis Ridarelli b.1942), from Philadelphia, is a singer, drummer, and performer. Rydell had hits in the 1960s with “Wild One” and “Volare” and starred in the film Bye Bye Birdie. He continues to perform internationally today.

Here are the lyrics to “The Cha -Cha-Cha” by Bobby Rydell:

And when you see the Wah-Watusi (Wah, wah) you’d go a’ha, ha, ha
The Hully Gully isn’t nothin’ (Wah, wah, wah)
When you compare it to the cha, cha, cha

So, oh, baby come-a, come-a sway me, drive me crazy
Do the Cha, Cha, Cha, come on and sing it now

The Locomotion in the ocean and I go ha-ha-ha
The Mashed Potatoes ain’t the greatest
When you compare it to the Cha, Cha, Cha

So, oh, baby come-a, come-a sway me, drive me crazy
Do the Cha, Cha, Cha, and let me hear it again

For others song by Bobby Rydell: “Wildwood Days and “Wild One.”

If you are interested in learning more about Bobby Rydell, here is an interview with him about his autobiography Bobby Rydell: Teen Idol on the Rocks.

Please click here for the Daily Doo Wop YouTube channel, to which you can subscribe. Thank you for stopping by The Daily Doo Wop. Hope you enjoyed “The Cha-Cha-Cha” by Bobby Rydell.