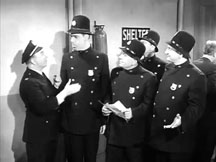 The television in the Daily Doo Wop Rec Room besides the record player and juke box has a TV set with several selections of classic TV shows/ There are typically four selections, which include an episode from a show from this golden age of television, a TV game show from the era, a cartoon or short, and a vintage commercial. The TV is updated twice a week, so after these dates, there will be new material. Just click on the TV and then on your selection.

For the semi-finals, Jan Murray is brought in as the celebrity judge. When he sits down to listen, he is informed that each of the 150 semi-finalist quartets will sing identical arrangements of “By The Light Of The Silvery Moon” featuring a steady “boom boom boom” background. Murray sits through a seemingly endless string of city employees singing the same monotonous “boom boom boom” and starts twitching. By the time Murray hears his 50th set of “boom boom booms” he has a full-fledged nervous breakdown.

In the days that follow, as the final contest approaches, Murray’s world constantly collides with the 53rd Precinct Whippoorwills practicing their “boom boom boom.” It all makes for a very funny episode with Jan Murray as the victim of New York’s finest as they sing “boom boom boom.”

The second selection for the TV, is a Max Fleischer Color Classic Cartoon titled “Greedy Humpty Dumpty.” It was originally released on July 10, 1936.

From 1934 to 1941 Fleischer Studios produced a series of 36 short subject “Color Classic” cartoons for Paramount Pictures. Short subjects were 7-10 minute features employed by theater owners to enhance the audience experience at movie shows. Paramount released the Fleischer “Color Classics” to compete with the successful Disney “Silly Symphony” series. These cartoons enjoyed a second life in the 1950s when shown on television as ready-made programming for Baby Boomers.

“Greedy Humpty Dumpty” portrays the popular nursery rhyme character as a miserly and tyrannical king. Humpty decides that the sun is made of gold and forces his subjects to build a wall all the way to the sun in order to mine the gold. While the outcome is predictably tragic, the cartoon is upbeat and funny. It features two original songs and a host of animated nursery rhyme characters.

The third selection is a vintage Patti Play Pal commercial. Ideal made the Patti Play Pal doll from 1959-1962. She was considered to be a companion doll. At about 35 inches high, Patti was about the size of a three-year-old girl.