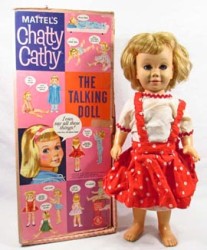 The Chatty Cathy doll was a popular toy in the late 50s and into the 60s. The term Chatty Cathy has even entered our culture and is a name for a person who talks a lot.

Here is some trivia about the toy:

Here is a vintage commercial for Chatty Cathy from the early 60s: