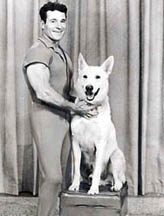 The Jack LaLanne Show came about in the doo wop era — and had longevity. The show aired on TV from 1953 until 1985. The focus in particular was to help the women of America become interested in exercise, health clubs, and diet. LaLanne often had his dog Happy on the show, as it helped to distract the audience from the monotony of exercise. In addition to the show, LaLanne opened health clubs, invented exercise machines, sold a juicer, wrote books, and used all the media he could, including radio, telelvision, and print to get his message out.

Jack LaLanne, who is considered to be the “godfather of fitness” was born Francois Henri LaLanne in San Francisco in 1914 and died in Morro Bay, CA, in 2011 at the age of 96. And he taught about fitness and nutrition until then. He said: “If you want to change somebody, don’t preach to him. Set an example and shut up.”

To prove how strong and healthy he was at age 70, LaLanne swam a 1.5-mile section of Long Beach Harbor while towing 70 people in 70 boats. Oh yes, LaLanne was also handcuffed and shackled at the time.

Two of his guidelines for food were as follows: