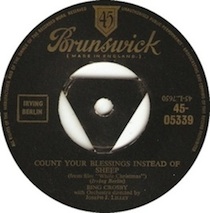 It’s always a nice part in the 1954 film White Christmas when boy gets girl – that is, when Bing gets Rosemary before Bing loses Rosemary and wins her back. They sit together late at night around a cozy fire at the Vermont Inn. He asks her about the kind of sandwich she’d like to eat because different foods produce different dreams. However, if she chooses liverwurst and buttermilk, she’ll “dream of liverwurst and buttermilk.” And then Bing sings Irving Berlin’s song “Count Your Blessings (Instead of Sheep)” to her to ease her mind.

The song is often played around the end-of-the-year holidays, although there’s nothing in the song that mentions Christmas specifically. The message, similar to the old hymn “Count Your Blessings,” is to look around you, gain perspective, and be grateful for what you have rather than what you don’t have.

Both Bing Crosby and Rosemary Clooney recorded the song, and both versions were popular. “Count Your Blessings” was nominated for Best Song in 1955 for the 27th Academy Awards, but “Three Coins in a Fountain” won that year.

Please click here to view a clip of Crosby and Clooney singing the song in the movie White Christmas. And it ends with a kiss, of course.