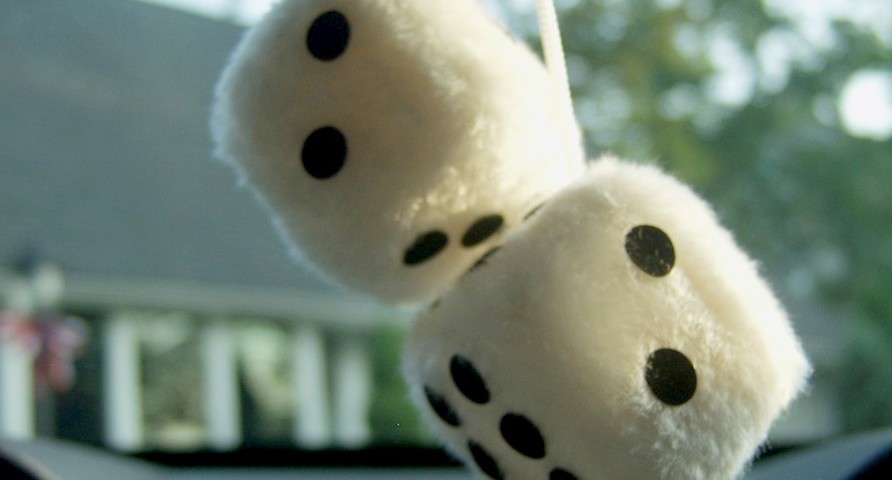 Ah, those fuzzy dice…Some sources say that they originated with American fighter pilots during World War II, who would hang dice above their instruments for, of course, good luck during their mission. In the 1950s, the airmen continued the tradition by hanging the dice from the rear-view mirror in their cars. One story is the Mark Shepherd Jr., who had been a CEO of Texas Instruments, created the first fuzzy dice for an engineer who was working for the company. It was a joke gift, as the engineer liked real dice, and it was to wish him good luck. There is no correlation whatsoever between hanging fuzzy dice in the care and reckless driving behavior. So far as good fortune goes, well, that’s up to the driver.

Ah, those whitewall tires. Their popularity peaked in the 1950s and early 1960s. They had originated with the Vogue Tyre and Rubber Co. of Chicago, who made them for horse and chauffeur-drawn carriages in 1914. Whitewalls were considered stylish in the 1920s and 1930s. Ford began to offer them as an option for all new cars in 1934. Supplies were limited during World War II and the Korean War, but they came back in style again later in the 1950s.

Ah, those dashboard hula doll ornaments… Folks during the 1950s liked things Hawaiian: shirts, surfing, hula dancing and hula hoops, and Tiki bars. The soldiers who fought in the Pacific during WWII brought back a passion for Polynesia. Also, Hawaii became a state in 1959.