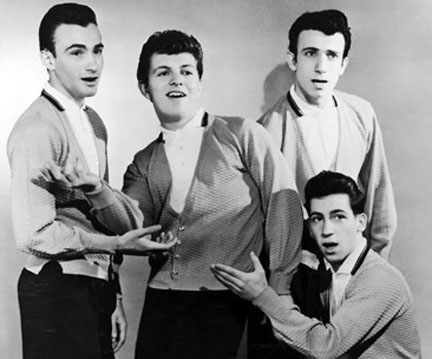 Dion and the Belmonts had a top ten hit with the song “Where Or When.” It was released in 1959 and rose up to #3 on the U.S. Billboard Hot 100. The song comes from the 1937 Richard Rodgers & Lorenz Hart musical Babes In Arms, a story about a boy who puts on a show with his friends rather than go to a work farm.

Dion and The Belmonts consisted of Dion DiMucci, Carlo Mastrangelo, Fred Milano, and Angelo D’Aleo. The name Belmonts came from Belmont Avenue in the Bronx. The members had lived either on or near that street.

Here are the lyrics to “Where or When” by Dion and the Belmonts:

For more songs by Dion and the Belmonts: “I Wonder Why” and “A Teenager in Love.”

Please click here for the Daily Doo Wop YouTube channel, to which you can subscribe. Thank you for stopping by The Daily Doo Wop. Hope you andenjoyed “Where or When” by Dion and the Belmonts.