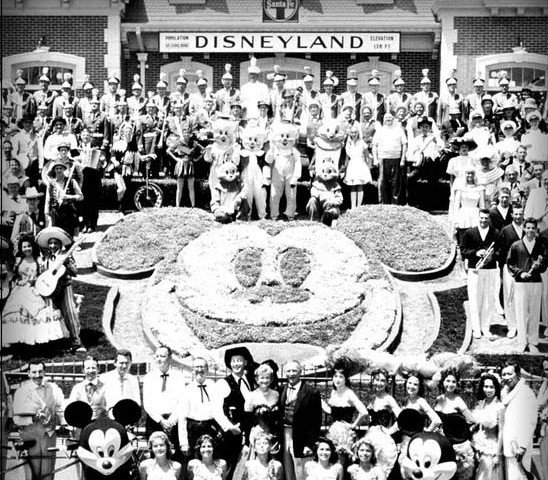 A happy 61st anniversary to Disneyland, which opened this week back on July 17, 1955!

To say that the opening was a fiasco is an understatement, but it quickly turned around. Walt Disney was very much in debt on his beloved project. The opening was almost delayed by two months because of plumbers and asphalt workers going on strike in Orange County. Deals were made, but there was a lack of water fountains at first, and the asphalt was so new that people’s shoes sank into it. Rides broke down. Counterfeit tickets caused an influx of people, and the roads around Disneyland were jammed. And the list goes on.

Walt Disney checks out the Peter Pan ride before the opening of Disneyland.

According to Bob Thomas in his book Walt Disney: An American Original, just before the opening of Disneyland, Walt received a letter from the parents of a boy who was dying of leukemia. The boy’s wishes were to meet Pinky Lee and to ride on Walt Disney’s train in Disneyland. When the family called the Disney studio, they were asked to report to Disneyland that Saturday morning. Walk met them and said to the boy, “I understand you want to see my train — well, let’s go.” They went. It was the Santa Fe and Disneyland’s first trip around the park. Afterwards, Walt presented the boy with a gold-framed pictures of artwork from Lady and the Tramp, similar to the one he sent to Grace Kelly and Prince Rainier of Monaco as a wedding gift.

However, the problems were rectified, and Disneyland became a happy place. Some claim it’s the happiest place on earth.