Book of Love by The Monotones

The educational television programs Watch Mr. Wizard (1951-1965, 1971-1972) and Mr. Wizard’s World (1983-1990) were hosted by Don Herbert. He helped several generations to become interested and excited about science and technology. His message was always upbeat, making science fun and accessible to everyone. He was your friendly neighborhood scientist. These science programs were good for children and adults. 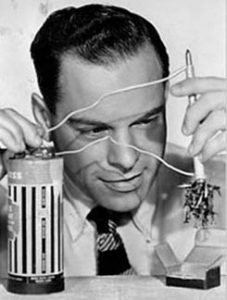 Herbert was born Donald Herbert Kemske in Waconia, Minnesota, in 1917. He was interested in being an actor, but during World War II, he enlisted in the U.S. Army. He then joined the U.S. Army Air Forces and became a B-24 bomber pilot. He earned a Distinguished Flying cross and the Air Medal with three oak leaf clusters.  He worked in radio and created the Watch Mr. Wizard program for the Chicago NVC station WNBQ. Watch Mr. Wizard won a Peabody Award in 1954. Over the decades, he dedicated himself to teaching science to children on TV and film, including  being a progress reporter on General Electric Theater, a series of eight films Experiment: The Story of a Scientific Search, a series on scientific topics titled “How About,” films that could be used in news programs, a series called “Teacher to Teacher with Mr. Wizard” to showcase elementary school teachers and their class science projects, and many more.  Another little bit of trivia is that Herbert and Bill Murray were the first guests on Late Night with David Letterman in 1982.