The term litterbug for someone who leaves their garbage behind in in appropriate places modeled itself after the term jitterbug, which was early 20th-century slang for an alcoholic (that is, someone who has the jitters or delirium tremens). The alcohol or “jitter juice” made during the Prohibition days was not of the finest quality and produced all sorts of undesirable effects (e.g., blindness, nerve damage). Cab Calloway made the term popular in music and film, for example, in his 1935 short film Cab Calloway’s Jitterbug Party.

In the 1950s, the Keep America Beautiful folks used the term litterbug in their anti-trash in public places campaigns. Posters and signs had an ugly insect that warned: “Don’t be a litterbug.” There was the witty ditty that claimed “every litter bit hurts.” At this beginning of championing environmental cuases, there were public service announcements that showed the harmful effects of litter to humans and wildlife. As Americans began to drive their cars more for work and pleasure, the trash on roadways caused many accidents. 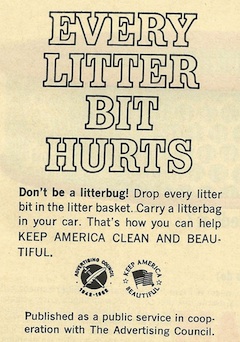 There was also the song “Don’t be a Litterbug” by Len Dells, which was really the Ly-Dells, a doo wop trio from Philadelphia. They also recorded “Let this Night Last” and “Wizard of Love.”

And, of course, in the 1970s, there was Iron Eyes Cody, the crying Indian (who was really an Italian-American actor), who wanted to retain the clean beauty of the land. Please click here to watch his iconic commercial.