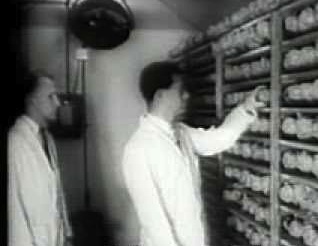 The polio vaccine was one of the largest medical advances of the 1950s. Polio greatly concerned mid-century Americans, as there had been numerous severe epidemics as well as a President who was affected. Each year thousands of children died or were disabled from the disease. Franklin D. Roosevelt had contracted polio when he was young and subsequently could not walk. In 1938, Roosevelt began the National Foundation for Infantile Paralysis (called The March of Dimes for fundraising) to support research and education efforts to fight polio. The 1952 outbreak was the worst in U.S. history, with 58,000 cases reported. In 1953, Dr. Salk announced his breakthrough with the vaccine. He believed that protective immunity could happen without infection by using noninfectious, inactivated (killed) viruses. After extensive field trials, the vaccine was pronounced safe and available in 1955. Dr. Salk’s vaccine, which was injected, was eventually replaced by Albert Sabin’s oral vaccine. Thousands of lives worldwide have been saved as a result. In its way, the vaccine contributed to the lives and quality of life for the 1950s baby boomers.

If you would like to learn more about Dr. Salk and the polio vaccine, please consider this from amazon: Polio: An American Story