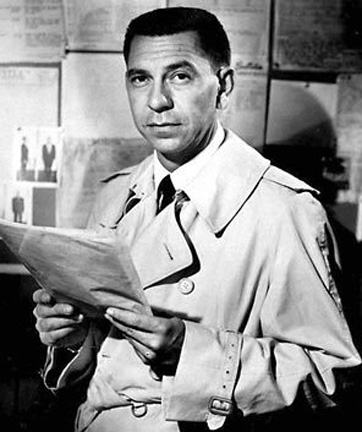 Ladies and gentlemen, the story you are about to see is true. The names have been changed to protect the innocent…” Jack Webb created Dragnet, which became one of the most popular and recognizable police shows in a variety of media, including radio, television, comic strips, and film. The classic TV series aired from 1951 to 1959. (Another series aired from 1967 to 1970.) Webb worked with the LAPD in researching Dragnet, which made the show realistic. He wanted to show the day-to-day work on the force.

Here are some Dragnet TV show trivia questions and answers:

A: #3 714. The inspiration for the number, the story goes, was from Webb’s love of baseball. In particular, he loved the New York Yankees and Babe Ruth. The Babe had  hit 714 home runs in his career at the time when Webb was writing Dragnet. Also, Badge 714 belong to Sergeant Dan Cooke, the technical advisor to Webb. The badge has been retired and is displayed at the LAPD Academy’s Museum.

Q: Which of these Dragnet characters was a real person, as opposed to being a fictitious character?

A: #4. They were all real people. Webb used some real names of those in the LAPD, including Chief of Detectives Thad Brown, Deputy Chief of Police Lynn White, andr Chief and Police William H. Parker. Sergeant Joe Friday was fictional, of course. Although, people sometimes called the LAPD and asked for him, and the switchboard operators would say that it was his day off

Q. Even though it was 1950s television, which subjects were taboo for Dragnet?

A: #4 None of these. Not many subjects or crimes were taboo, as he wanted to represent what was happening in Los Angeles. Some cases were just too graphic to portray on the show, yet they still interested Webb. In 1958, he published a book The Badge, which contained true crime stories that could not be presented on TV.

And let’s not forget the music…

The arresting four-note introduction from Dragnet, that is, “Dum Dee Dum Dum,” as it were, is considered to be the second most recognizable after the one to Beethoven’s Fifth Symphony. The music for Dragnet, written by Walter Schumann, was known for more than just the theme, as it enhanced the tension of the drama and there would be loud sudden bursts when there was a revelation.

The music inspired two hit records. One was by Ray Anthony and His Orchestra in 1953. The other was Stan Freberg’s parody “St. George and the Dragonet” in 1951. It sold more than one million copies and opened with “The legend you are about to hear is true; only the needle should be changed to protect the record.”