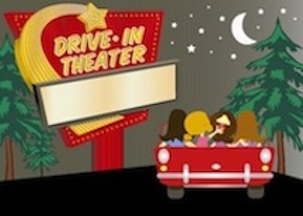 A great icon of this first era of rock and roll was the drive-in movie theater. America was on the move; you could gather up the kids, drive, park, and watch a movie from your car. The kids could wear pajamas. You could take along blankets and pillows. Food and drinks were at a concession stand – if you hadn’t provided your own. If you were a teen, it was an ideal date (no more said). It was part of American car culture.

At their simplest, drive-in theaters were an outdoor movie screen, a projection booth, a parking lot, and a snack bar.