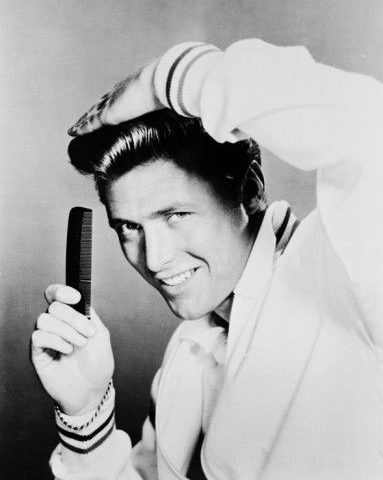 Well, “Yulesville,” novelty Christmas piece recorded in 1959 and performed by Edd “Kookie” Byrnes. The words and music are by Warren E. Barker, Terry Galanoy, and William A. Olofson.

Kookie was a recurring character on the hit 1950s TV Show 77 Sunset Strip. A parking attendant who constantly combed his stylish hair, Kookie also got into the act as an unlicensed protégé detective who helped the private eyes (played by Efrem Zimbalist, Jr. and Roger Smith) on their cases.

Kookie called everybody “Dad” and was ABC TV’s tribute to the Jack Kerouac style cult-hipster and James Dean in Reel Without A Cause.  Kookie talked a jive-talk “code” to everyone whether you understood him or not.  He was the prototype adopted  years later by Henry “The Fonz” Winkler of Happy Days.

Byrnes was in the 1978 movie Grease as the TV teen-dance show host Vince Fontaine. He also had a charting recording with “Kookie, Kookie — Lend Me Your Comb,” which he did with the lovely Connie Stevens.

Here are the words, which are spoken, to “Yulesville” by Edd Kookie Byrnes:
SPOKEN:
‘Twas the night before Christmas and all through the pad
Not a hip cat was swingin’ and that’s nowhere, dad
The stove was hung up in that stocking routine
Like maybe the fat man would soon make the scene
The kids had fell by and just made the street
I was ready for snoresville, man was I beat
When there started a rumble, it came on real frantic
So I opened the window to figure the panic
I saw a slick rod that was makin’ fat tracks
Souped up by eight ponies all wearin’ hat racks
And a funny old geezer was flippin’ his lid
He told ’em to make it and, man, like they did
They were outta the chute makin’ time like a bat
Turnin’ the quarter in eight seconds flat
Parked by the smokestack in bunches and clusters
Then chubby slid down, comin’ on like gangbusters
His threads were from Cubesville and I had to chuckle
In front, not in back, was this Ivy League buckle
The mop on his chin hid a button-down collar
And with that red nose, dad , he looked like a bawler
Like he was the squarest, the most absolute
But, let’s face it, huh, who cares when he left all that loot
He laid the jazz on me and peeled from the gig
Wailin’ “Have a cool yule, man” and later “like, dig?”

Please click here for the Daily Doo Wop YouTube channel, to which you can subscribe. Thank you for stopping by The Daily Doo Wop. Hope you enjoyed “Yulesville” by Edd “Kookie” Byrnes.