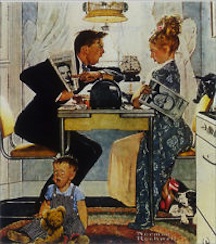 Politics certainly brings out the emotional and passionate side of people. Norman Rockwell’s painting “Election Day” appeared on the October 30, 1948, edition of The Saturday Evening Post. It was just before the contentious, bitterly divided election between Thomas E. Dewey and Harry S. Truman. Rockwell’s painting depicts the ideological divide. In the figures here, there’s a male, probably the husband and father, who is certainly adamant about his position and is shouting about his candidate for the election because he’s meeting resistance from the female figure, who is probably the wife and mother, and is equally adamant about her choice. She has her candidate and holds to it. Her eyes glare at him, her lips pout, and her back is straight and unbending. It’s very unlikely that his points are going to sway her vote one iota. In 1948, women only had the right to vote for 28 years. Rockwell, in a way, celebrates that she has the right to make up her own mind, stick to it, and vote. Also, that particular Presidential election was won by a thin margin. There was, of course, the infamous banner “Dewey Defeats Truman” in The Chicago Tribune. Oops. While the parents argue over the politics, though, there are consequences for the innocents in the household; it upsets the dog, who is crouching beneath the woman, and the poor child who is crying. If the scene is a microcosm of the country (and this is said with my poetic license, which I think is somewhere in a box in the garage with old tax receipts), there’s the caution that a house divided cannot stand.

As the 2014 midterm elections are upon us, Rockwell’s painting is very timely. The United States have been very bitterly divided this entire 21st century so far, starting with the hanging-chad presidential election of 2000. The American genius for compromise has been lacking, and the innocents suffer.

Norman Rockwell always claimed that he was an Independent voter, neither Republican nor Democrat. One could infer from his paintings that he was socially liberal. Some of his iconic paintings include issues of the day. For example, “The Four Freedoms” was based on Franklin Delano Roosevelt’s address to Congress in 1941. There are also works created during the Civil Rights movement, including the 1964 painting “The Problem We All Live With.” It shows six-year-old Ruby Bridges escorted to a white school by U.S. Marshals in New Orleans in 1960 during the era of desegregation. President Barack Obama hung that painting in the West Wing near the Oval Office.

Let’s please tone down the rhetoric and vote, folks.