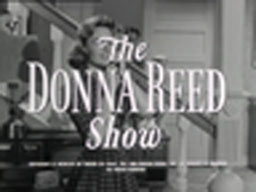 The first episode of the long-running series in which America was introduced to the Stone family was on The Donna Reed Show.  This is the first glimpse of the sometimes chaotic day-to-day life of the Stones, always tempered by the sweet and loving Donna Reed as Donna Stone, TV’s first “highly visible” Mom of the 1950s. Donna  gives advice, discipline, humor and wisdom to her family —  a role usually reserved for the TV Dads of that time.

In this premiere episode, Donna hopes to get away for a weekend of skiing with her brood. However, her pediatrician husband Alex’s (Carl Betz) on-call schedule makes this impossible, especially since one of his young patients, Eddie Barclay, has a mysterious illness and Alex doesn’t want to leave him in the care of another doctor. Not wanting to disappoint her children Mary (Shelley Fabares) and Jeff (Paul Petersen), Donna takes charge of things. Always the problem-solver, Donna gets another doctor to take Alex’s calls and pinpoints the origins of Eddie’s illness to fear of the school bully.

This highly successful TV show ran from 1957 to 1966, and was created by William Roberts and developed by Reed and her then husband, producer Tony Owen. Roberts wanted to respectfully picture the many demanding roles a stay-at-home mom was expected to master – wife, mother, companion, housekeeper, cook, laundress, seamstress, PTA officer, choir singer, and scout leader  –  all while being “effervescent, immaculate, and pretty.”

Reed stated, “We started breaking rules right and left. We had a female lead, for one thing, a strong, healthy woman. We had a story line told from a woman’s point of view that wasn’t soap opera.”

Reed described the show as follows: “I would call The Donna Reed Show a realistic picture of small town life, with an often humorous twist. Our plots revolve around the most important thing in America:  a loving family.”