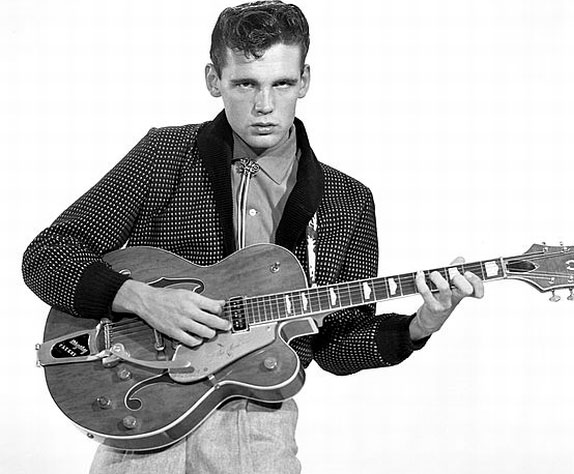 The selection for this week’s Instrumentals Tuesday is ” Forty Miles of Bad Road” by Duane Eddy, His ‘Twangy’ Guitar, and The Rebels. The song is credited to Duane Eddy and guitarist Al Casey. It was released as a single in 1959, backed with “The Quiet Three” and on his album $1,000,000 Worth of Twang.

The story behind the song is that Eddy’s producer, the music biz heavyweight Lee Hazlewood, overheard a conversation where one man said to another: “Your girl has a face like forty miles of bad road.” And that sounded like a good idea for a song.

Duane Eddy was born in Coming, New York, and began to play the guitar at the age of five. He played lead on the guitar’s bass strings that produced a low, “twangy” sound, for which he became famous. He had many charting records, including “Cannonball,” “Peter Gunn,” “Rebel Rouser, “Because They’re Young,” “Moovin’ n’ Groovin’,”(Dance with The ) Guitar Man,” and many more. Eddy continues to tour and perform.

For another tune by Duane Eddy: “Rebel Rouser.”

Please click here for the Daily Doo Wop YouTube channel, to which you can subscribe. Thank you for stopping by The Daily Doo Wop. Hope you enjoyed “Forty Miles of Bad Road” by Duane Eddy.