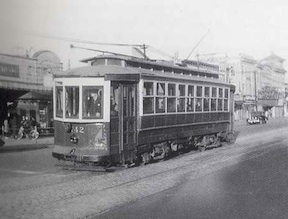 On October 31, 1956, Brooklyn, New York, ended its streetcar service. That doesn’t sound monumental, but the decline of streetcars in favor of buses and automobiles came after years of contention between big business and local government. Trolleys were a relatively inexpensive light transit above ground that connected neighborhoods and allowed people to move to areas where they could commute to work.

Starting in the 1930s, National City Lines (NCL) and its subsidiary Pacific City Lines (PCL), were both owned by General Motors, Standard Oil of California, Firestone Tire, and Phillips Petroleum. This group preferred to promote their buses and supplies and began acquiring control of light transit companies across America. NCL and PCL would then dismantle the trolley systems and replace them with their buses. This became the Great American Streetcar Scandal. In 1949, the Federal District Court of Southern California convicted NCL and PCL for this conspiracy of acquisition. The scandal helped to inspire the movie Who Framed Roger Rabbit? The ruling came too late, though, to save Brooklyn’s trolleys, which were rapidly disappearing. The trolleys also did not fit into the vision of Robert Moses, who was New York City’s master-builder. Moses looked into the future and saw highways and growth in the suburbs. And, besides, people loved their cars.

Another piece of trolley trivia is that The Brooklyn Dodgers got their name from being “trolley dodgers” to get out of the way of the streetcars. The Dodgers left Brooklyn, too. They moved to Los Angeles for the 1958 season.

Please click here for a vintage film of the Brooklyn trolleys.