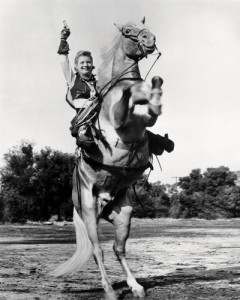 Not all the Westerns on film or TV revolved around men. Gail Davis was perky and petite at 5’2″with pigtails, but she played strong characters in the Westerns, particularly as Annie Oakley in the classic TV show of the same name. Gail Davis was born Betty Jeanne Grayson in Little Rock, Arkansas, in 1925. She studied drama and dance at the University of Texas, and she was also an accomplished equestrienne. When she and her first husband, Bob Davis, moved to Hollywood and she went under contract with MGM, they told her she needed a professional name. There was already a Bette Davis, and Betty Grayson was too close to Kathryn Grayson. So Gail Davis it became.

Davis often had roles in Western films. This includes The Far Frontier with Roy Rogers. She had a long association with Gene Autry and appeared in about 20 films with him or for his production company and toured with Gene Autry’s traveling rodeo. On television, she appeared in The Cisco Kid, The Lone Ranger, The Range Rider, The Adventures of Kit Carson, and The Gene Autry Show. She’s best known for her role as Annie Oakley in Annie Oakley classic TV show series, which aired from 1954 to 1957 and was picked up for syndication after that. Of the character, Davis said: “Annie Oakley had to deal with the same ruthless characters–rustlers and killers–that the cowboys dealt with. And she did it without ever killing a one of them.” She was the first female to have the nominal lead in a Western TV series, which helped her to be awarded a star on the Hollywood Walk of Fame. Davis also made a guest appearance on another classic TV show, The Andy Griffith Show, as Thelma Lou’s cousin. She received the Golden Boot Award from the Motion Picture and Television Fund in 1994. She died of cancer at the age of 71 in 1997.

Here is Gail Davis singing about that train, “The Wabash Cannonball.”

If you are interested in having a complete DVD set of the series, please consider this: Annie Oakley: The Complete TV Series

The Daily Doo Wop Rec Room features a TV set that has four selections from classic TV shows. There are usually an episode from a series, a game show, a cartoon or short film, and a vintage commercial.