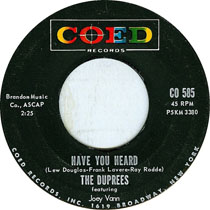 Another doo wop classic is  “Have You Heard?” as performed by The Duprees. Ah, the heartaches of trying to hear news about a lost love. Is she sad? Is she with someone else? Is she getting married?

In 1963, “Have You Heard?” went to #18 on the Billboard Hot 100 and was on the chart for 10 weeks. It is a popular song, which was written by Lew Douglas, Charlie LaVere, and Roy Rodde and published in 1952. Joni James recorded it in 1952 and it charted in 1953. Other versions include those by The Belmonts, Sonny Til and The Orioles, Tony Brent, Lita Roza, and The Beverley Sisters.

The Duprees were high school friends from Jersey City, New Jersey, and formed in the early 1960s. The original group consisted of Joey Canzano (aka Joey Vann), Michael Armone, Joe Santollo, John Salvato, and Tom Bialoglow. They combined their doo wop vocals with big band-style arrangements. On this song, the orchestration padding is  a sax section with a clarinet on top playing lead.  (This is similar to the sound that caused Jimmy Stewart to get goose bumps in movie  The Glenn Miller Story.)

Here are the lyrics to “Have You Heard” by The Duprees:

Have you seen
(Ahh… Ahhh… Ahh)
The way she looks now?
(Doo.. Doo… Doo…Ooo)
Does she act the same?
When she hears my name?
Does she say who’s to blame?

Have you heard (Ahhh… Ahhh… Ahh)
Of their wedding day?
(Doo… Doo.. Ooo)
Rumors come and go
Still I’d like to know
If it’s true, Won’t you tell me?

Have you heard
(Ahhh… Ahhh… Ahhh)
Of their Wedding Day?
(Doo… Doo… Doo…Ooo)
Rumors Come and go
Still I’d like to know
If it’s true won’t you tell me?

For other songs by The Duprees: “You Belong to Me” and “Why Don’t You Believe Me.”

If you are interested in an album of music by The Duprees, please click on the photo below:

Please click here for our Youtube channel, to which you can subscribe. Thank you for stopping by The Daily Doo Wop. Hope you enjoyed “Have You Heard” by The Duprees.