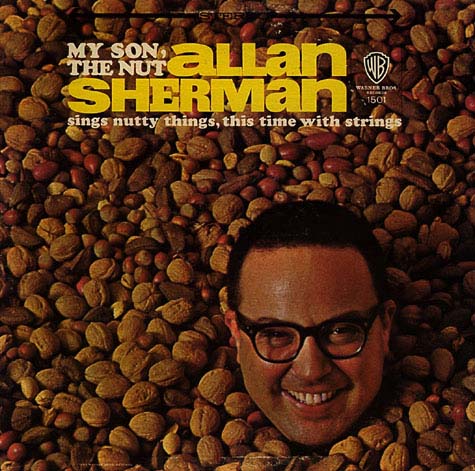 The novelty song for this Friday is “Hello Muddah, Hello Fadduh (A letter from Camp)” by Allan Sherman. This offering from Allan Sherman’s second LP, My Son The Nut, was based on real letters of complaint that Sherman received from his son Robert while away at summer camp. The song is a series of funny gripes about a fictional “Camp Granada” set to Ponchielli’s “Dance of the Hours.” The lyrics describe a child’s exaggerated view of unpleasant and dangerous conditions such as constant rain,  a lake full of alligators, and a bunkmate with malaria. All ends well because the rain stops and the kids are all having fun, and the son asks his parents to “kindly disregard this letter.”

The song quickly went to #2 on The Billboard Hot 100 and stayed there for three weeks beginning August 24, 1963. The song also won a Grammy in 1964 for Best Comedy Single.

Allan Sherman was a comedy writer, TV producer and personality, and song parodist. Sherman created and produced the CBS game show “I’ve Got a Secret,” which ran from 1952 to 1967. Sherman lived in Los Angeles and used to sing his crazy songs at parties. Warner Bros. Records found out about this and signed him up. The outcome was the huge hit album My Son, The Folksinger, which quickly earned Sherman a gold record. (In the late 1950s and early 1960s there was a brief folk song revival – with a little help from folks like Bob Dylan. Christopher Guest’s 2003 film A Mighty Wind has a good take on those times.) With his own brand of humor, Sherman had fun injecting Jewish-American life into the American folk song tradition. A famous song from that album was “Sarah Jackman,” which is sung to the tune of “Frère Jacques.” It is a phone conversation between Sherman and the fictional Sarah (performed by Christine Nelson). Rumor has it that President John F. Kennedy was overheard singing the song.

How could you not love a man who personally struggled with obesity and wrote:

“Somewhere, over the rainbow, Way up tall
There’s a land where they’ve never heard of cholesterol”?

Here are the lyrics to “Hello Muddah, Hello Faddah ( A Letter from Camp)” by Allan Sherman.

Hello Muddah, hello Faddah
Here I am at Camp Grenada
Camp is very entertaining
And they say we’ll have some fun if it stops raining

Take me home, oh Muddah, Faddah
Take me home, I hate Grenada
Don’t leave me out in the forest where
I might get eaten by a bear

Take me home, I promise I will
Not make noise, or mess the house with
Other boys, oh please don’t make me stay
I’ve been here one whole day

Dearest Fadduh, Darling Muddah
How’s my precious little bruddah
Let me come home if you miss me
I would even let Aunt Bertha hug and kiss me

Please click here for the Daily Doo Wop YouTube channel, to which you can subscribe. Thank you for stopping by The Daily Doo Wop. Hope you enjoyed “Hello Muddah, Hello Fadduh (A Letter from Camp)” by Allan Sherman.