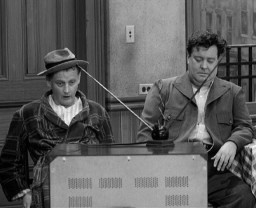 The television show The Honeymooners premiered sixty years ago on October 1, 1955. Its first episode was titled “TV or Not TV.” The show starred Jackie Gleason, Audrey Meadows, Art Carney, and Joyce Randolph. Gleason always said that at heart the show was a love story. Ralph and Alice Kramden would bicker and exchange wisecracks. Ralph might want to send Alice to the moon. But, in the end, he told her she was “the greatest.” In “TV or Not TV” we see that the prosperity during the 1950s was in full swing with new appliances and cars. Ralph is a bus driver and can’t afford any of it. He can’t keep up with the Nortons no less the Joneses. Even Ed Norton, who works in the sewer, and his wife Trixie have a TV and other conveniences — even if they pay for it on credit. Ralph and Alice have had the same apartment and sparse furnishings forever, and she wants some changes. Ralph and Norton put together a scheme to share a TV set.

The Honeymooners came about originally as a recurring sketch that began on the DuMont Network’s Cavalcade of Stars and then on The Jackie Gleason Show. Cavalcade of Stars was a live variety show (1949-1952) that starred Jackie Gleason, Jack Carter, The June Taylor Dancers, Art Carney, Sammy Spear and His Orchestra, and many more.  The Jackie Gleason Show (1952-1959) was also a vaudeville-style variety show and  starred, among its cast of regulars, Art Carney, Audrey Meadows, and Joyce Randolph.  The Honeymooners ran for only one season (1955-1956), but is consider to be classic comedy during this golden age of television.

If you would like to hear Ralph Kramden’s speech about the loveliness of Christmas, please click here for a clip from “Twas the Night Before Christmas” episode of The Honeymooners.