Honeymooners Twas the Night Before Christmas

Honeymooners Twas the Night Before Christmas 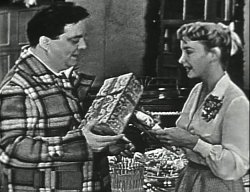 At this point in December, we’re busy – maybe very busy. It’s probably time for a pause and a deep breath. So why not go back in time during this first era of rock and roll and take a look at Christmas with The Honeymooners.

The Honeymooners TV show, which starred Jackie Gleason, Art Carney, Audrey Meadows and Joyce Randolph, was at heart a love story. Ralph and Alice might bicker and exchange wisecracks. Ralph might want to send Alice to the moon. But in the end, he told her she was “the greatest.” Poor Ralph. The prosperity during the 1950s was in full swing with new appliances and cars. He was a bus driver and couldn’t afford any of it. Even Norton, who worked in the sewer, had a TV and conveniences  — even if he paid for it on credit. Ralph and Alice had the same apartment and furnishings from past decades.

The “Twas the Night Before Christmas” episode of The Honeymooners first aired on December 24, 1955. Ralph spends his Christmas money on a present for himself, which is a new bowling ball. A neighbor duplicates the chintzy gift for Alice that Ralph bought (a box for hairpins made of 2,000 matches glued together). To remedy the situation, Ralph hocks his bowling ball. Alice, in O’Henry-story fashion, gives Ralph a no-longer-needed bowling ball bag for Christmas. Alice receives (to keep up with Norton’s gift to Trixie) a novelty juice squeezer where you put the oranges on Napoleon’s head and juice comes out of his ears.

Here’s Ralph on the loveliness of the Christmas season: