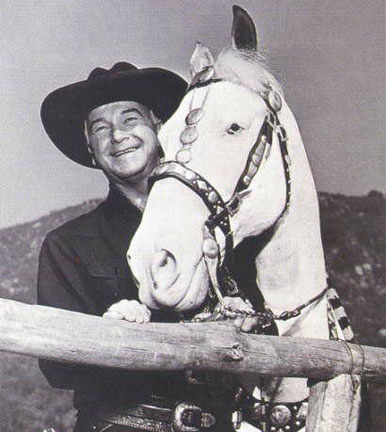 The answer to today’s trivia question is Hopalong Cassidy’s horse was called Topper.

Hopalong Cassidy or Hop-along Cassidy was a fictional character created in 1904 from the imagination of author Clarence E. Mulford. There were a number of short stories and novels based on the character. Originally, he was rough, rude, and dangerous. However, by 1935, when William Boyd first played Hopalong Cassidy in a film, the character was well-spoken and believed in fair play. Hoppy wore black (even his hat was black) which was opposite of the convention for good cowboys in Westerns. Topper, his horse, though, was white. Hopalong got his name because he had been shot in the leg. His favorite drink was a soft one, that is, sarsaparilla.

Hopalong Cassidy was a very popular cowboy hero, and his adventures appeared in many types of media. There were 66 Hopalong Cassidy films (called “Hoppies”). They had a lot of action and outdoor photography. Boyd has a star on the Hollywood Walk of Farm for his contribution to the motion picture industry. There were a number of sidekicks over the years. One very well-known one was Gabby Hayes.

There was the Hopalong Cassidy TV series, one of the classic TV Westerns, which aired from 1952 to 1954. Edgar Buchanan played Red Connors for comic relief. There were radio shows, novels (including ones by Louis L’Amour), comic books and comic strips and records. Boyd, as Hopalong, appeared on the covers of TV Guide, Look, and Life magazines. Boyd also traveled as Hoppy in circuses, parades, personal appearance tours, and rodeos.

The Hopalong Cassidy TV show had a number of sponsors over the years. One product Hoppy promoted was Sunbeam Bread. The franchised brand of bread, rolls, and other baked goods is owned by the Quality Bakers of America. It was first launched in 1942. Here’s a vintage Sunbeam bread commercial. And don’t forget, it’s Hoppy’s favorite! Running time is :53.