I’m Gonna Knock on Your Door by Eddie Hodges

I’m Gonna Knock on Your Door by Eddie Hodges 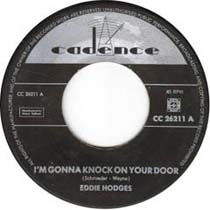 Eddie Hodges started his career at age ten when he co-starred in the 1957 smash Broadway musical The Music Man. He played young Winthrop Paroo and won the hearts of jaded New York theatergoers when he sang the song “Gary Indiana.” Two years later he made his film debut in the 1959 movie A Hole In The Head with Frank Sinatra, Thelma Ritter, and Edward G. Robinson. In the film, Hodges and Sinatra perform the hit song “High Hopes.” However, when Sinatra later recorded the single for Capitol Records, it was a solo with Hodges given a small line to sing in the last chorus.

“I’m Gonna Knock on Your Door” was written by Aaron Schroeder and Sid Wayne. It was originally recorded and released by The Isley Brothers in 1959. While it wasn’t a hit for the Isleys, it became a hit in 1961 for 14 year-old Hodges. The record peaked at #12 at Billboard Hot 100, #5 on the Country charts, and #1 in Canada.

Hodges went on to appear in eight feature films and many TV guest star appearances. He is probably best known for his performance as Huckleberry Finn in Michael Curtiz’s critically acclaimed1960 film The Adventures of Huckleberry Finn. Both Hodges and his co-star Archie Moore, who played Jim, received good reviews for their performances. Hodges also had a major role the 1963 Walt Disney film Summer Magic.