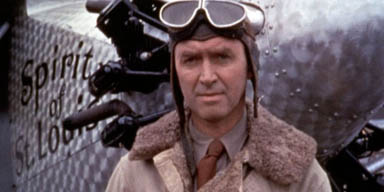 Musicians and the Military

James Stewart played the role of Charles Lindberg in the 1957 biographical film The Spirit of St. Louis. The film shows Lindbergh’s historic 33-hour transatlantic flight from New York to Paris in 1927.

James Stewart, in real life, was a pilot. He was the first major American movie star to go into the military, enlisting before Pearl Harbor. His family had been in the military for generations; both of his grandfathers had fought in the Civil War and his father served during the Spanish-American War and World War I. Although Stewart had trouble entering the U.S. Army because of the weight requirement (he was very thin), with a little help from his friends, he put on the extra pounds and enlisted successfully with the Air Corps. He was an avid pilot, with a pilot’s license and many hours of flying experience. He received his commission after the attack on Pearl Harbor. Because he had more than 400 hours as a civilian, he was permitted to take basic flight training and earned his pilot wings. During the next nine months, he instructed in AT-6, AT-9, and B-17 aircraft and flew bombardiers in the training school at Albuquerque, New Mexico. In1943, Stewart went to England as Commanding Officer of the 703d Bomb Squadron, equipped with B-24s.  He began flying combat missions and on March 31, 1944, was appointed Operations Officer of the 453rd Bomb Group and, then, Chief of Staff of the 2nd Combat wing, 2nd Air Division of the 8th Air Force. Stewart ended the war with 20 combat missions. James Stewart remained in the USAF Reserve and was promoted to Brigadier general on July 23, 1959. He retired on May 31, 1968, and was promoted to Major General.