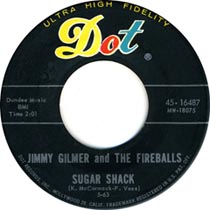 The song “Sugar Shack” was written in 1962 by Keith McCormack and Jimmy Torres, who talked New Mexico band Jimmy Gilmer and the Fireballs into recording the song in 1963. They recorded where Buddy Holly had to launch his career, which was at Norman Petty’s studio in Clovis, New Mexico. From the day of its release, the record’s infectious beat made it a smash. “Sugar Shack” sold more than one million copies in a five-week period and was eventually named Billboard’s 1963 “Song of the Year.” It also went to #1 on the R&B Chart and the Australian Chart. What is that high-pitched instrument? Is it a piccolo? An Ocarina? Nope. It was a Hammond Solovox Organ. The most famous misheard lyric in “Sugar Shack” is “There’s this cute little girlie, she’s a’workin’ there. / A black leotard and a three-dollar bear” instead of “and her feet are bare.”

Here are the lyrics to “Sugar Shack” by Jimmy Gilmer and His Fireballs:

There’s a crazy little shack beyond the tracks
And ev’rybody calls it the sugar shack
Well, it’s just a coffeehouse and it’s made out of wood
Espresso coffee tastes mighty good
That’s not the reason why I’ve got to get back
To that sugar shack, whoa baby
To that sugar shack.

The [Fade]has daily featured doo wop, rock and roll, R&B, or rockabilly songs that were hits during the first era of rock and roll (that is, from about 1952 until the British invasion in 1964). After a song is featured, it then goes into the juke box. You are welcome to listen to any of the 40+ selections there. Every weekend, there is a Golden Oldies Juke Box Saturday Night, and the juke box is full of song requests from the 1950s and 1960s.

Please click here for the [Fade], to which you can subscribe. Thank you for stopping by The Daily Doo Wop.