Til I Kissed You by The Everly Brothers 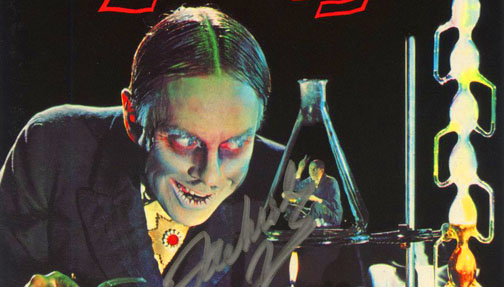 John Zacherle, a native of Philadelphia, was a TV host, radio personality, singer, and voice actor. He hosted Shock Theater (1957-8) and Zacherley at Large (1959-60), which were TV programs that aired horror flicks. Zacherle was good friends with Dick Clark, who, the story goes, gave Zacherle the nickname of “The Cool Ghoul.” In 1958,  Zacherle recorded “Dinner with Drac,” backed by Cameo Parkway’s house band, Dave Appell and The Applejacks. To have the novelty song performed on American Bandstand,  though, Clark had Zacherle tone it down with a less violent version. So, Cameo released “Dinner With Drac, Part 1,” which was the original, and “Dinner with Drac, Part 2,” which was the alternate on the flip-side.

Here are the lyrics to “Dinner with Drac, Part 1”:

A dinner was served for three
At Dracula’s house by the sea
The hors d’oeuvres were fine
But I choked on my wine
When I learned that the main course was me!

The waitress a vampire named Perkins
Was so very fond of small gherkins
While she served the tea, she ate 43
Which pickled her internal workin’s!

Igor, the scalpels go on the left
With the pitchforks, Igor, Igor

What a swimmer is Dracula’s daughter
But her pool looks more red than it ought-er
The blood stains the boat
But it’s easy to float
‘Cause blood is much thicker than water!

Dracula, old friend,
How are things in Transylvania?
For dessert there was batwing confetti
And the veins of a mummy named Betty
I first frowned upon it
But with ketchup on it
It tasted very much like spaghetti!

Goodnight whatever you are!

Please click here for the Daily Doo Wop YouTube channel, to which you can subscribe. Thank you for stopping by The Daily Doo Wop. Hope you enjoyed “Dinner with Drac, Part 1” by John Zacherle “The Cool Ghoul.”