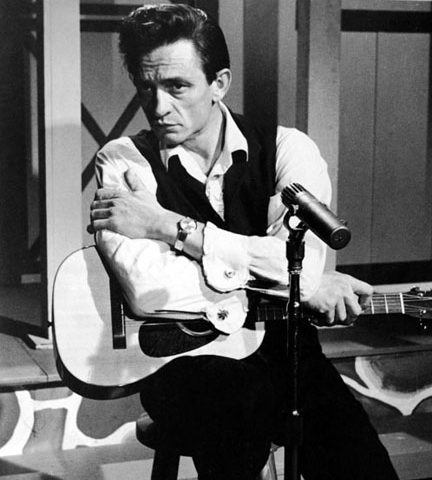 The song was written and originally recorded by Johnny Cash in 1956 on the Sun record label. It was his first #1 hit, and it reached the top of the U.S. Country Chart and crossed over to peak at #17 on the U.S. Pop Chart.

Cash says that the chord progression for “I Walk the Line” came from when he was in the U.S. Air Force stationed in Germany and would listen to backwards playback of guitar runs on his tape recorder. Regarding the story for the lyrics, Cash says: “I was newly married at the time, and I suppose I was laying out my pledge of devotion.” The song was first supposed to be a slow ballad, but producer Sam Phillips had Cash do it uptempo. There are modulations between the verses, and Cash says that he hums to get the pitch. On the track are also the Tennessee Two,  Marshall Grant  (bassist) and Luther Perkins (guitarist). The song was re-recorded four times during Cash’s career and appears on numerous LP’s.

Rolling Stone magazine has “I Walk the Line” on their list of the “500 Greatest Songs of All Time.” Besides other recordings by Cash, there have been numerous covers, including versions by The Everly Brothers, Dolly Parton, Glen Campbell, Jay P. Morgan, Live, Craig Wayne Boyd, and Halsey, just to mention a few.

Here are the lyrics to “I Walk the Line” by Johnny Cash:

I keep a close watch on this heart of mine
I keep my eyes wide open all the time
I keep the ends out for the tie that binds
Because you’re mine, I walk the line

I find it very, very easy to be true
I find myself alone when each day is through
Yes, I’ll admit that I’m a fool for you
Because you’re mine, I walk the line

As sure as night is dark and day is light
I keep you on my mind both day and night
And happiness I’ve known proves that it’s right
Because you’re mine, I walk the line

You’ve got a way to keep me on your side
You give me cause for love that I can’t hide
For you I know I’d even try to turn the tide
Because you’re mine, I walk the line

I keep a close watch on this heart of mine
I keep my eyes wide open all the time
I keep the ends out for the tie that binds
Because you’re mine, I walk the line

For another song by Johnny Cash: “A Boy Named Sue,” which is on The Daily Doo Wop’s sister site Pass the Paisley.