Little Egypt by The Coasters

Bobby Day’s Over and Over

Little Egypt by The Coasters 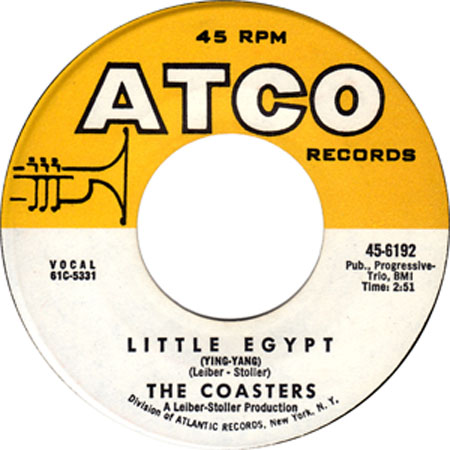 Another one of the those fun story-telling R&B doo wop songs written by Jerry Leiber and Mike Stoller is “Little Egypt.” In this case, it’s the story of how the singer found a love of many talents. The track was released in 1961 as a single, with the B-Side “Keep on Rolling,” and went to #16 on the R&B Chart and #23 on the Billboard Hot 100. The song was also on the 1962 Coast Along with the Coasters album. There have been covers of “Little Egypt,” including versions by The Downliners Sect, Elvis Presley, and Cher.

The Coasters formed in 1955 in as a spin-off of The Robins, which was a Los Angeles-based rhythm and blues group. Only Carl Gardner and Bobby Nunn moved to New York. Nunn left the group after a while, and the famous lineup was Gardner, Billy Guy, Will “Dub” Jones, and Cornell Gunter. The Coasters had many hits, including “Charlie Brown,” “Down in Mexico,” “Yakety Yak,” “Searchin’,” “Young Blood,” and “Along Came Jones,” among many others. Needless to say, there were plenty of personnel changes after that, and The Coasters still perform today.

Here are the lyrics to “Little Egypt” by The Coasters:

She had a ruby on her tummy
And a diamond big as Texas on her toe, wo wo
She let her hair down and
She did the hoochie koochie real slow, wo wo

She did a triple somersault and when she hit the ground
She winked at the audience and then she turned around
She had a picture of a cowboy tattooed on her spine
Saying ‘Phoenix, Arizona, 1949’

If you would like to read about and listen to other Lieber and Stoller songs by The Coasters: “Poison Ivy,” “Charlie Brown,” “Young Blood,” and “Yakety Yak.”

Please click here for our Youtube channel, to which you can subscribe. Thank you for stopping by The Daily Doo Wop. Hope you enjoyed “Little Egypt” by The Coasters.