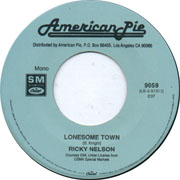 The song “Lonesome Town” was written by Baker Knight, a musician and songwriter whose songs were also recorded by Paul McCartney, Elvis Presley, Jerry Lee Lewis, Dean Martin, Frank Sinatra, Sammy Davis Jr., and Mickey Gilley. In 1958, the song was a hit for Ricky Nelson, rising to #7 on the U.B. Billboard Hot 100 and #15 on the R&B chart, become a 1950s music golden oldies favorite.

There have been many other versions of this song about a lover’s heartbreak, including two by The Ventures. Others include covers by The Cramps, Paul McCartney, Holly Golightly, Jason Donovan, and Tiguana Bibles, just to mention a few. “Lonesome Town” has appeared in film (Pulp Fiction), TV (Heroes), and a game (Stubbs the Zombie in Rebel, with a cover by Milton Mapes).

Eric Hilliard Nelson (aka Ricky and then Rick Nelson) had an amazing career as a singer, songwriter, instrumentalist , and actor. Besides his music, he’s best known for playing himself on the long-running television series The Adventures of Ozzie and Harriet (1952-1966) as well as co-starring with John Wayne and Dean Martin in Howard Hawks’s western film Rio Bravo (1959). Nelson has been inducted in the Rock and Roll Hall of Fame and the Rockabilly Hall of Fame. He has a star on the Hollywood Walk of Fame.

Here are the lyrics to “Lonesome Town” by Ricky Nelson:

If you would like to read about and listen to another song by Ricky Nelson, please click here for “Travelin’ Man.”