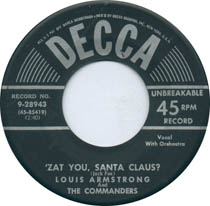 In honor of St. Nick’s feast day (i.e., December 6), is one of our favorite golden oldies, which is Louis Armstrong and The Commanders performing a Christmas jazz song “‘Zat You Santa Claus?” Armstrong recorded the song in 1953 on Decca records. The song is possibly one of the first Halloween and Christmas hybrids, a forerunner in spirit, as it were, to films such as Nightmare Before Christmas. The singer of the song is concerned that the noise at the door might be Santa – or a prowler. Will Santa bring “something pleasantly pleasant” for the singer? Or maybe it’s only the wind.

There’s a story about Armstrong’s love for Christmas. Soon after Armstrong married Lucille Wison in 1942, they were on the road together. She bought a little Christmas tree and a string of lights to put up in their hotel room where they were staying for one of his gigs. Armstrong was very moved because he had been traveling (in one way or another) all his life and never had his own tree. That tree traveled with them for a long time until every pine needle dried and fell off.

Although Armstrong recorded many Christmas singles, he never did an entire Christmas album. What A Wonderful Christmas is a compilation of his Christmas songs and came out in 1995, many years after his death.

Louis Armstrong could distill the essence of a musical composition into just a few notes. For much, much more and a great read about Armstrong’s life and career, see Terry Teachout’s meticulously researched, comprehensive  narrative biography Pops – A Life of Louis Armstrong.