Lullabye by The Chevrons

Lullabye by The Chevrons 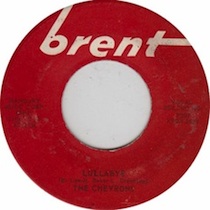 Part of the history of doo wop were those groups that had a New York sound, and one of those were The Chevrons. “Lullabye” was a top 40 hit in 1960 and earned the Chevrons an appearance on Dick Clark’s American Bandstand. The song was written by Mickey Baker, Lee Greenlee, and Booker Lee. The Chevrons started singing in the Inwood Section of upper Manhattan in 1958. Group members were: tenor lead singer Dennis Minogue (later known professionally as Terry Cashman), lead baritone/baritone John “Marty” Trautman, second tenor Gary Giordan, first tenor Frank Williams, and bass, Al Conde. The Chevrons broke up in 1962 when Marty Trautman was drafted into the U.S. Army.

At the time of the recording, Dennis Minogue was playing minor league baseball with the Detroit Tigers. The combination of baseball and music would play a part in his later success. On re-entering the music business in 1964, Minogue changed his name to Terry Cashman and had a long string of hits as a performer, writer, and producer. In 1979 he wrote the iconic “Talkin’ Baseball” which eventually led to his being honored at the Baseball Hall of Fame in Cooperstown, NY.

The Daily Doo Wop Rec Room has daily featured doo wop, rock and roll, R&B, or rockabilly songs that were hits during the first era of rock and roll (that is, from about 1952 until the British invasion in 1964). After a song is featured, it then goes into the juke box. You are welcome to listen to any of the 40+ selections there. Every weekend, there is a Juke Box Saturday, and the juke box is full of song requests from the 1950s and 1960s. Please click here for our Daily Doo Wop Youtube channel, to which you can subscribe. Thank you for stopping by The Daily Doo Wop.