Monster Mash by Bobby Boris Pickett and The Crypt Kickers

Monster Mash by Bobby Boris Pickett and The Crypt Kickers 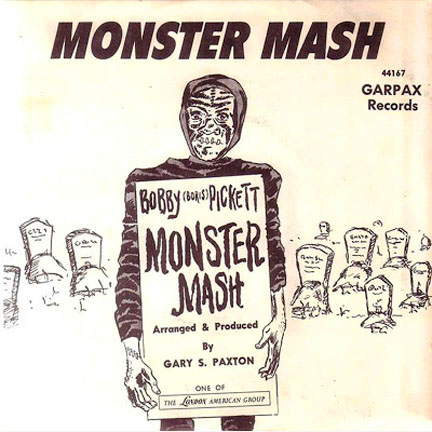 For those of us thinking back to the first era of rock and roll, Halloween involves listening to “Monster Mash” by Bobby “Boris” Pickett and The Crypt-Kickers.

Bobby Pickett was born Robert George Pickett in Somervile, Massachusetts. His father was a theater manager, so Bobby saw many horror films as a child. Pickett and Leonard Capizzi co-wrote “Monster Mash,” as a parody of the dance crazes at the time (e.g., the mashed potato, the twist). Label after label turned it down, but Gary S. Paxton produced it for his Garpax Records. The Crypt-Kickers were Leon Russell on piano, Johnny MacRae, Rickie Page and Terry Berg. (Sometimes Mel Taylor, drummer for The Ventures, is credited as well.) The song went to #1 on Billboard Hot 100 in 1962 and sold more than one million copies, earning it an RIAA gold record. There was also an LP “The Original Monster Mash,” which had other monster-themed songs on it. “Monster Mash” rose from the dead and charted in the U.S. again in 1970 and 1973. “Monster Mash” went to #3 in the U.K. in 1973. And the song gets airplay annually to this day.

Pickett was an U.S. Army veteran, having served during the Korean War. He released other themed and parody albums and wrote for stage, film, and TV. He died in 2007 at the age of 69 due to complications from leukemia.

Here are the lyrics to “Monster Mash” by Bobby “Boris” Pickett:

I was working in the lab, late one night
When my eyes beheld an eerie sight
For my monster from his slab, began to rise
And suddenly to my surprise

The zombies were having fun
The party had just begun
The guests included Wolfman,
Dracula, and his son

The scene was rockin’, all were digging the sounds
Igor on chains, backed by his baying hounds
The coffin-bangers were about to arrive
With their vocal group, ‘The Crypt-Kicker Five’

Out from his coffin, Drac’s voice did ring
Seems he was troubled by just one thing
Opened the lid and shook his fist and said
“Whatever happened to my Transylvania Twist? ”

Now everything’s cool, Drac’s a part of the band
And my Monster Mash is the hit of the land
For you, the living, this mash was meant too
When you get to my door, tell them Boris sent you

Please click here for the Daily Doo Wop YouTube channel, to which you can subscribe. Thank you for stopping by The Daily Doo Wop. Hope you enjoyed “Monster Mash” by Bobby Boris Pickett and The Crypt Kickers.