More Money for You and Me by The Four Preps

Fats Domino Ain’t That a Shame

More Money for You and Me by The Four Preps 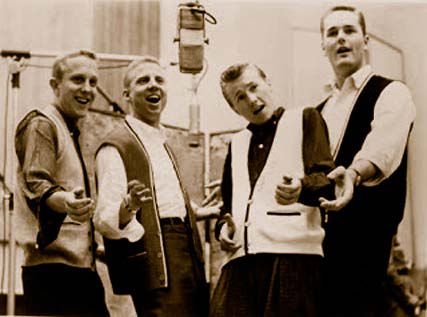 The Four Preps were students at Hollywood High School who took up singing together, and they became popular quickly. Capitol Records signed them in 1956. They were Bruce Belland, Ed Cobb, Marv Ingram, and Glen Larson. Their biggest hit was in 1957 with “26 Miles (Santa Catalina),” which reached #2 on the Billboard Hot 100. In 1959 the group appeared as themselves in the movie Gidget. They were on the TV sitcom The Adventures of Ozzie and Harriet for four years. Over the years, the group had a great deal of success, with eight gold singles and three gold albums.

In 1961 The Four Preps released  a single, “More Money for You and Me,” which parodied the style and songs of several popular artists of the day. This included The Fleetwoods, The Hollywood Argyles, The Platters, The Four Freshmen, The Kingston Trio, and Dion & the Belmonts.

Here are the lyrics to “More Money for You and Me” by The Four Preps:

first we have the fleetwoods, a very successful group
let’s send them to alaska to entertain our troops
when they start in a-singin’ and puttin’ on their show
the temperature around them will be forty-five below

wo-wo-wo, i’m mister blue, when i say i’m freezin’
just turn around, head for the warmth of town
i’m freezin’ through and through
call me mister blue

next the hollywood argyles, a mighty nice group of kids
we’d like to send them roving on a downhill pair of skids

and while they’re down there working, they won’t be all alone
they’ll run into another group that’s even hot back home

next we have the freshmen
a group that rates a cheer
of course, they’ve been four freshmen
for almost twenty years
it isn’t that they’re stupid
well, a little may be so
they can’t afford to graduate
they’re making too much dough

in this whole wide world
is there nowhere to send them?
is there no one place
we can tell them to go?

we got the kingston trio some work on cuba’s sh*r*s
they hung around havana to do a few encores
castro said ‘i like ’em. let’s hang ’em up some more.’
now he has all three hangin’ permanently

each time i steal a hubcap it almost breaks my heart
why do i steal hubcaps, why did i have to start?
each night i ask the stars without fail
why must i be a teenager in jail?

where these groups all come from, we really do not know
but if they ever ask us we will tell them where to go!

For another song by The Four Preps: “26 Miles Santa Catalina.”

Please click here for the Daily Doo Wop YouTube channel, to which you can subscribe. Thank you for stopping by The Daily Doo Wop. Hope you enjoyed “More Money for You and Me” by The Four Preps.

he Four Preps parodied popular artists of the day in their 1961 song “More Money for You and Me” — The Fleetwoods, The Platters, Dion and more.