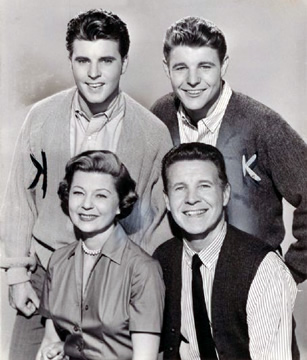 Here is a sampling of what was seen on TV during the 1950s and early 1960s. There were sitcoms, including I Love Lucy and The Adventures of Ozzie and Harriet. Popeye the Sailor cartoons have been a perennial favorite. And there’s Vincent Price presenting special Peter Paul candy. Enjoy!

A clip from I Love Lucy where “Little Ricky Learns to Play the Drums.” It is from Season 6, Episode 2, which first aired on October 8, 1956.  Everybody gets into da act…Lucille Ball and Desi Arnaz do some funny ensemble work. Running time:  2:33.

Popeye the Sailor cartoon “Fright to the Finish” (1954). Both Popeye and Bluto vie for Olive Oyl. Running time: 6:20.

The TV set in the The Daily Doo Wop Rec Room has four selections, which are updated about twice a week.