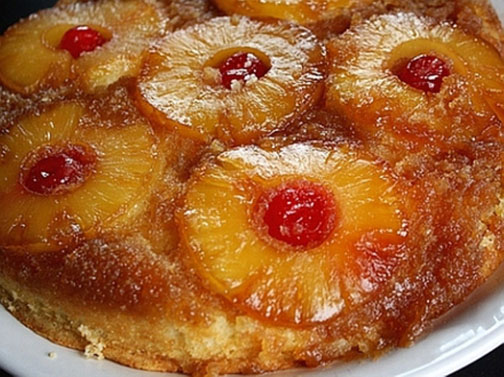 This retro recipe for the ever-popular Pineapple Upside Down Cake was sent in by Judy Wear, who follows The Daily Doo Wop on Facebook. (Thank you, Judy Wear!) She writes that this was her mother’s recipe. Her Mom made it often because they always had company on Sundays after church. Her mother would make the cake on Saturday night. If they were having many people over, then she would make two cakes.

Cooking a cake with sliced fruits upside down in a pan or skillet has origins in the middle ages. Canned pineapple came about in 1901, and sliced pineapple in cans became available in the 1920s when an engineer working for James Dole (of Dole Pineapple) invented a machine to slice pineapples into rings.

In 1925, the Hawaiian Pineapple Company sponsored a contest for pineapple recipes with judges from the Fannie Farmer’s School, Good Housekeeping, and McCall’s Magazine. More than 2,500 of the 60,000 submissions were recipes for pineapple upsidedown cake. The company decided ran an ad about all of these pineapple upside-down cake recipes, and that made the cake even more popular.

The Maraschino cherry was introduced into America in the late 19th century and was used in cocktails as well as to decorate many food items, including hams, milkshakes, sundaes. It adds a bright finishing touch to the pineapple upside down cake.

It is one of those great retro cake recipes!