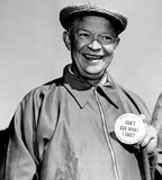 We like to have our Presidents and Civil Servants always dedicated to working on the problems of the day. However, they do need time (within reason, of course) as human beings to relax and refresh the mind. This is as true for our current Presidents, as it was for Dwight D. Eisenhower. He loved the game. It was as controversial then as it is now.

On January 24, 1953, only four days after his inauguration, as reported by The New York Times, President Eisenhower was found “on the White House lawn practicing his short irons in the direction of the Washington Monument.” In December, 1953, The Journal of the American Association for Health, Physical Education,and Recreation had published the article”Muscular Fitness and Health” by Dr. Hans Kraus and Bonnie Prudden, which stated that America’s youth was not physically fit. Ike liked to play golf. He believed it was good recreation and, with articles such as this one in mind, he promoted the game for all members of the family

During his two terms, Ike played 800 rounds of golf. He became friends with some of the famous golfers of his day, including Arnold Palmer, Ben Hogan, and Byron Nelson. Ike’s passion inspired new golfers — as well as many jokes. He was “the golfing general,” the “golfer-in-chief” with a “36-hole workweek.”

It’s not that he was an especially great golfer. He was said to be a slicer, “with an adequate short game and an unreliable putter.” But that didn’t deter him. However, he didn’t enjoy disclosing his score. He said, “If I don’t improve, I’m going to pass a law that no one can ask me my golf score.”