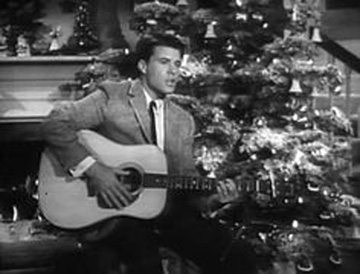 The song, which is also subtitled “Chestnuts Roasting on an Open Fire” and originally subtitled “Merry Christmas to You”, was written by Bob Wells and Mel Tormé in 1945. The Nat King Cole Trio was the first to record it in 1946. And there have been, oh my, so many covers ever since, including Rosemary Clooney, Frank Sinatra, Bing Crosby, Johnny Mathis, Robert Goulet, Tony Bennett, and the list goes on and on. Rick Nelson recorded this pop Christmas standard in 1964, and his voice fits it beautifully.

Here are the lyrics to “The Christmas Song” by Rick Nelson:

And so, I’m offering this
Simple phrase to kids from
One to ninety-two
Altho’ it’s been said many times
Many ways; “Merry Christmas to you”

Please click here for the Daily Doo Wop YouTube channel, to which you can subscribe. Thank you for stopping by The Daily Doo Wop. Hope you enjoyed “The Christmas Song” by Rick Nelson.