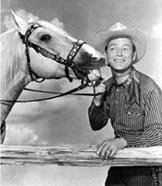 Where would the movies the movies and television of the 1950s be without a mention of Roy Rogers and Trigger? The talented, intelligent Trigger (1934-1965) was a Palomino horse originally called Golden Cloud. He first appeared in films in 1938 in Under Western Skies, which starred Roy Rogers and Smiley Burnette. Rogers had chosen Golden Cloud because he was quick in body and mind. The story goes that Burnette observed the horse was sure “quick on the trigger.” Rogers thought Trigger would be a good name, and the rest is history. Trigger was trained to respond to touch and hand movements rather than reins, whip, and spurs. Trigger learned about 150 trick cues and could walk 50 feet on his hind legs; he was billed as “the smartest horse in the movies.” The list of credits for Trigger includes dozens of films (short and feature-length), mostly Westerns (although Trigger was in 1938 film The Adventures of Robin Hood as the mount for Maid Marian, who was played by Olivia de Havilland), and The Roy Rogers Show (1951-1957). During World War II, Roy and Trigger toured the U.S., raising millions in the sale of bonds to help in the war effort. Trigger won a Patsy award for his role in the film Son of Paleface (1952), which also starred Bob Hope, Jane Russell, and Rogers.

After Trigger died, Rogers had the remains preserved. Trigger was at the Roy Rogers/Dale Evans Museum in Victorville, California. (The remains of Dale’s horse Buttermilk and their German Shepherd Bullet were preserved as well.) After Roy and Dale died, the museum moved to Branson, Missouri, but was not successful enough to continue. In 2010, the collection sold at auction, and RFD-TV, a cable TV company in Omaha, Nebraska, purchased Trigger and Bullett. So goes the story of Roy and Trigger.

If you are interested in Roy Rogers and Trigger movies, please consider this: Roy Rogers 20 Movie Pack (4 DVD)