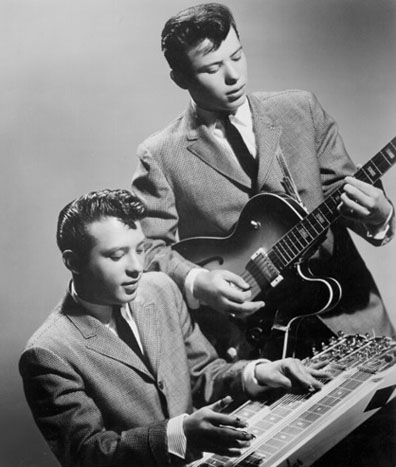 This  beautiful  instrumental not only was a #1 hit in 1959, but it’s been used in many films, commercials, and TV shows (e.g., La Bamba, Legend, Sleepwalkers, Twelve Monkeys, Charlie’s Angels). There have also been numerous covers, including versions by Betsy Brye, Al Kooper, The Ventures, Deftones, Leo Kottke, The Stray Cats, Chet Atkins, Jeff Beck, The Chantays, and the Brian Setzer Orchestra. It’s a great one for slow dancing…

Santo and Johnny were the brothers Santo Anthony Farina and John Steven Farina from Brooklyn, New York. Santo played a steel guitar and Johnny a standard electric guitar. They formed as a duo in 1959 and performed and recorded together until 1976. Their music crossed a number of genres, including rock and roll, surf rock, and instrumental rock. When “Sleep Walk” was a hit in 1959, Santo was only 22, and Johnny was 18. They had also had a Top 40 hit “Tear Drop,” which charted several months later. In 2002, Santo and Johnny were inducted into the Steel Guitar Hall of Fame. Santo is more or less retired now, and Johnny tours and records with his own band . He is also the President of Aniraf, Inc., an international record company.

Please click here for the Daily Doo Wop YouTube channel, to which you can subscribe.  Thank you for stopping by The Daily Doo Wop. Hope you enjoyed “Sleep Walk” by Santo and Johnny.[/vc_